Hijab on the Runway

1400 years and still going strong… this piece of cloth has evolved in terms of fashion yet still is a symbol of peace!

Hijab, a simple cloth to cover up her femininity is the prerogative of modesty that a Muslim woman adheres to. It’s a symbol of purity to many, an agent of liberation to me, whilst to others, it is synonym of oppression and terrorism. However, like everything around us, the hijab has also evolved. It has grown up…changed…and even been through something as huge as a revolution.

From the simple black three corner scarf, the hijab has undergone a makeover by the top dogs. From Dolce&Gabbana to Yves St Laurent, the modern day Muslim woman now showcases these brands on her head. The hijab has been painted in every hue of the rainbow and created from every fabric you could desire. Accessorising has even reached the head, with scarf pins and slides in imaginative shapes and adorned with crystals and beads to match perfectly with every outfit.

Say good bye to the age old way of tying the hijab as your mom did and say a warm hello to styles from the deserts of the middle East,to Turkish and even pure African inspired styles.

But hijab is not just the scarf one wears to cover the hair and her chastity, it also refers to the actual dressing of a female. When one think of Islamic clothing, they tend to picture dark, uninspiring cloth that drapes from ones head to her feet, boring and totally depressing garments that don’t look appealing. But Islamic wear can be as modern and fashionable as any other – as long as it stays within the Islamic guidelines of modest dress.

Muslim girls have shown their imaginative and creative sides by creating new wardrobe ideas that mix fashion must-haves with a little something more to look modestly modern. South African girls have been experimenting for years with this style and can be spotted with their skinny jeans, sleeveless dresses and little boleros or jackets to cover their shoulders. The mini-skirt-and-jeans look seems to be visiting the scene again. This time with tights substituting the jeans. Another fashion piece that is loved is the longer length tops, the kaftan style tops and the shirt dresses that provide style and still look decent, Mini dresses teamed with many different bottoms (trousers or pants) can be seen visiting the malls. And the scarves are funkier, brighter and more pronounced.

One can choose from the long horizontal scarf either draped around the neck or tied inthe Arabian style “dupatta”, if you’re less conservative, the bandana gives u coverage while still looking cool. A new entry on the scene is the kuffiyeh – the Palestinian scarf that took mainstream fashion by storm – seen around the necks of fashion models and big stars. It’s now worming its way around the necks and heads of the hijabi fashionistas.

With mainstream fashion houses painting their names on hijabs, Muslim fashion designers felt it was time to make their styles be worn too…and who better than someone who knows what the twenty first century Muslim women wants?

Around the globe one finds different designers launching their collection of modestly modern Islamic wear that aims at breaking away from the stale traditional styles and introducing a fresh take on what hijab clothing can look like.

Saouli is one of the first in this new breed of modestly modern designer wear. Based in Brussels, this company launched its first collection in 2000, ambitiously going door-to-door to introduce its trendy yet modest designs to the growing population of Muslim women. From this humble inception they have now grown into a flourishing company that have their designs featured on the catwalks of Paris, Belgium and the UK. 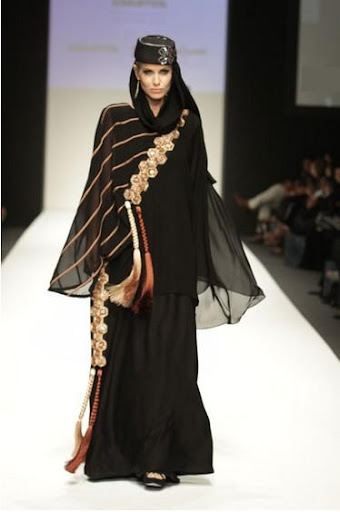 Another designer that is leading the hijab revolution with her fusion of western and Islamic garments is Sophie Kara with her Imaan Collection, a Leicester designer who sought to transform the traditional black jilbab (long outer garment) from black and drab to a canvas with personality and sass while still holding firm to Islamic heritage.

With more designers trying their hand at Muslim inspired garments, the Islamic fashion scene is shifting from garments that were home sewn to cater for one’s own family to fashionable designer garments that can be found at different boutiques and stores. From fashion shows to magazines aimed for the hijabi fashionista this new comer to the scene is growing world wide… This one’s for the liberated yet fashionable female!!

21 Hijabi Tips for Plus Sized Muslimahs

20 Lessons from Divorce for Muslimahs