‘Abdullah ibn ‘Amr ibn al-‘Aas (RA) narrated that the Prophet (SAW) passed by Sa‘d when he was performing wudhu, and he said, “What is this extravagance, O Sa‘d?” He said: Can there be any extravagance in wudhu’? He said, “Yes, even if you are on the bank of a flowing river.”

Cape Town has been experiencing one of the worst droughts in years, and thus Capetonians have been employing various methods of water conservation to delay the impending Day ZERO. However, as Day ZERO fast approaches; talks have now shifted to “how will we get by?“. To assist households and businesses WWF South Africa has been issuing weekly updates termed “Weekly Wednesday Files” which also include a ‘‘Bucket List” –

“Our bucket is empty and so the Bucket List will help us fill it by raising awareness of the severity of the drought and encouraging people to urgently do something about it through a series of useful hints and tips. Some are obvious, others are not. Some are doable, others are much more challenging. All are essential.

We can only save water when there is water to save.”

The significance of water in Islam

Water is mentioned 63 times in the Qur’an with the addition of many references to rain, snow and ice. It is one of the most important resources to every single creation on earth. In Islam, water plays a central role in our daily lives as it is the primary source for all types of purification.

O You who believe! When You intend to offer As-Salat (the prayer), wash Your faces and Your hands (forearms) up to the elbows, rub (by passing wet hands over) Your heads, and (wash) Your feet up to ankles. If You are in a state of Janabah (i.e. had a sexual discharge), purify yourself (bathe Your whole body). But if You are ill or on a journey or any of You comes from answering the call of nature, or You have been In contact with women (i.e. sexual intercourse) and You find no water, then perform Tayammum with clean earth and rub therewith Your faces and hands. Allah does not want to place You In difficulty, but He wants to purify you, and to complete his Favour on You that You may be thankful. Qur’an [5: 6]

Due to the ongoing water crisis; Muslims in Cape Town have started asking about how this affects Taharah (purification practices).

In the following table / infographic(click on the link to view and download) I have highlighted the scenarios for each instance in relation to the availability of water as deduced from the proofs (i.e. Qur’an or ahadith mostly cited from Bulugh Al Maram):

**For your perusal, I have included all proofs pertaining to wudhu, instinjaa, ghusl and tayammum in the section below.

… And if You are ill, or on a journey, or one of You comes after answering the call of nature, or You have been In contact with women (by sexual relations) and You find no water, perform Tayammum with clean earth and rub therewith Your faces and hands (Tayammum). Truly, Allah is ever Oft­Pardoning, Oft­Forgiving. Qur’an [4:43].

Tayammum is a concession. Hence, it may ONLY be performed under the following circumstances

It is also important to note that if you have performed tayammum and water becomes available whilst performing salaah, then it would be required to break off salaah and take wudhu.

It is permissible to make Tayammum from anything that is of clean earth such as clay, brick, rock, dust, sand, stone, limestone, baked earthen pots (unglazed), walls of mud, stone or brick, any item which have thick dust on them.

The manner of Tayammum

Resource for kids: How to perform Tayammum

Narrated Jabir bin ‘Abdullah (RA): The Prophet (SAW) said, “I have been given five things which were not given to anyone else before me. Allah made me victorious by awe (of frightening my enemies) for a distance of one month’s journey. The earth has been made for me (and my followers) a place for praying and (means of) purification (i.e. by performing Tayammum). Therefore, anyone (of my followers) must pray wherever the time of Salat (prayer) becomes due.” Bulugh Al-Maram 126: Book 1: Hadith 154

Narrated Abu Sa’id Al-Khudri (RA): Two men set out on a journey and when the time of Salat (prayer) came they had no water. They performed Tayammum with clean earth and prayed. Later on they found water within the time of the prayer. One of them repeated the prayer and ablution but the other did not repeat. Then they came to Allah’s Messenger (SAW) and related the matter to him. Addressing himself to the one who did not repeat, he said, “You followed the Sunnah and your prayer was sufficient (accredited) for you.” He said to the other (who performed ablution and repeated): “For you there is a double reward.” [Reported by Abu Dawud and An-Nasa’i]. Bulugh al-Maram 133: Book 1, Hadith 162

Ahadith pertaining to water and purification

Narrated Abu Hurairah (RA): Allah’s Messenger (SAW) said regarding the sea, “Its water is Tahoor (purifying) and its dead (animals) are lawful (to eat).” [Al-Arba’a and Ibn Abu Shaiba reported it. The wording is from the latter. Ibn Khuzaimah and At-Tirmidhi graded it Sahih (authentic). Malik, Ash-Shafi’i and Ahmad (also) reported it]. Bulugh al-Maram 1:Book 1, Hadith 1

Narrated Abu Umama Al-Bahili (RA): Allah’s Messenger (SAW) said, “Water cannot be rendered impure by anything except something which changes its smell, taste and colour.” [Ibn Majah reported it and Abu Hatim graded it Da’if (weak)]. Bulugh al-Maram 1:Book 1, Hadith 3 Al-Baihaqi reported: “Water is purifying, unless any impure thing is added to it which changes its smell, taste and colour.” Bulugh al-Maram 1:Book 1, Hadith 4

Narrated Abu Hurayrah (RA), which says that The Prophet (SAW) said: “Whoever does wudoo’, let him rinse his nose, and whoever does istijmaar let him use an odd number.” Sunan an-Nasa’i -The Book of Purification,Vol. 1, Book 1, Hadith 88. Muslim (262) narrated that Salmaan al-Faarisi (RA) said: “The Prophet (SAW) forbade us to clean ourselves using less than three stones.” Bulugh al-Maram 97: Book 1, Hadith 115

Narrated Anas ibn Maalik (RA) who said: When I was a boy, when the Messenger of Allah (SAW) entered the toilet I would carry a small vessel of leather filled with water, and he would clean himself with water. Sunan an-Nasa’i -The Book of Purification, Vol. 1, Book 1, Hadith 45

Anas (RA) Narrated that Allah’s Messenger (SAW) used to perform ablution with one Mudd (of water and perform Ghusl (bath) with one Sa’ to five Mudd (of water). [Agreed upon]. Bulugh al-Maram 56: Book 1, Hadith 65

Narrated ‘Abdullah bin Zaid (RA): Two-thirds of a Mudd (of water) was brought to the Prophet (SAW) (for ablution) so he was rubbing his forearms (between the wrist and the elbow). [Reported by Ahmad, and Ibn Khuzaimah graded it Sahih (authentic)]. Bulugh al-Maram 41: Book 1, Hadith 48

Narrated Abu Hurairah (RA): Allah’s Messenger (SAW) said, “None of you should take a bath in stagnant water while he is sexually impure.” [Muslim reported it] Bulugh al-Maram 6: Book 1, Hadith 6.

Al-Bukhari has: “None of you should urinate in stagnant water that is not flowing, and then take bath in it.” Muslim has the words: “from it (i.e. from the water).” Abu Dawud has: “One should not take bath in it from sexual impurity.”

And Ashab As-Sunan (here meaning Abu Dawud, Tirmidhi and Ibn Majah) reported that one of the wives of the Prophet (SAW) took a bath from a vessel, then the Prophet (SAW) came and when he wanted to take a bath from that (vessel), she said to him, “I was sexually impure.” He said, “Water does not become sexually impure.” [At-Tirmidhi and Ibn Khuzaimah graded it Sahih (authentic)]. Bulugh al-Maram 9: Book 1, Hadith 10

Narrated Ayesha (RA): I and Allah’s Messenger (SAW) used to take a Ghusl (bath) due to sexual impurity from the same vessel and our hands alternated in (scooping water from) it. [Agreed upon]. Ibn Hibban added “and (our hands) used to meet.” Bulugh al-Maram 123: Book 1, Hadith 150

** I have not focused on a specific school of thought in terms of the manner of performing wudhu/ghusl etc.

Resource for kids: How to perform tayammum 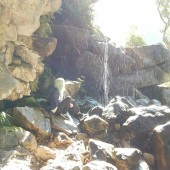 4 things for a Remarkable Ramadan

5 Things to do on Eid